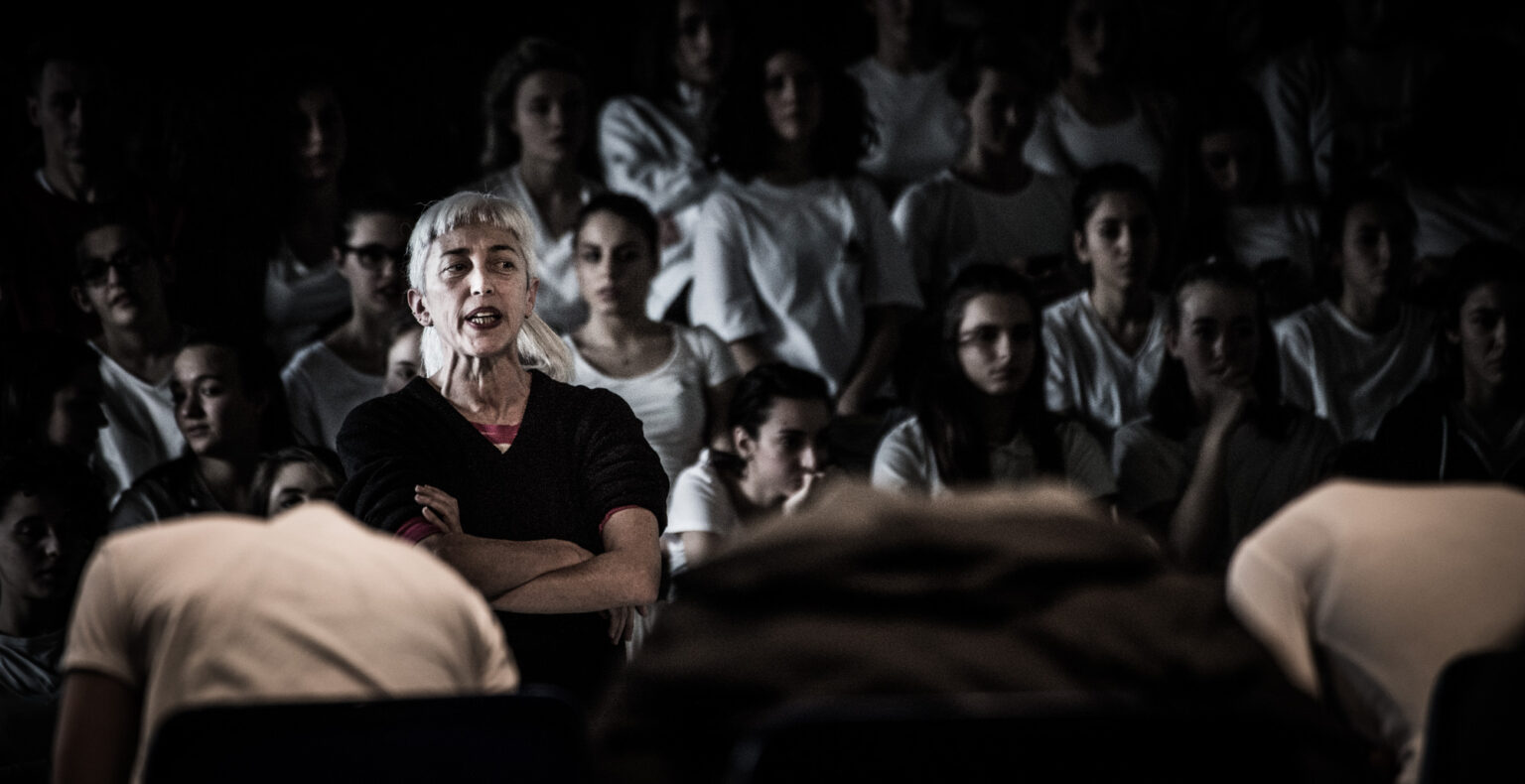 The choreographer’s or dance professional’s artistic research is dropped for a short period of time inside the school building, in order to involve a group of students in the work, contaminating it with their presence and bringing art and creative movement of bodies within the school.

Adriana Borriello started to dance at the age of three. She received a degree at Accademia Nazionale di Danza, at Experimental School for Dance Arts in Rome, and at Maurice Bejart’s Mudra School in Brussels, where she created her first choreographies. She studied and practiced Taichi from 1984. She participated in the founding of Anne Teresa de Keersmaeker’s Company Rosas, dancing in “Rosas danst Rosas” and she collaborated with Pierre Droulers as dancer and choreographer. In 1986, she founded her own company in Paris, which she later moved to Italy, and she realized important shows and international tours thanks to international co-productions. Between 1997 and 1999, she realised the frst Italian Choreographic Residency at the Teatridithalia in Milan, giving rise to Progeto Catartico, a choreographic and poetic investigation about rite and popular traditions. She was guest choreographer for several Opera Houses, Theatres and international Companies (Teatro dell’Opera in Rome, Teatro Comunale in Florence, Teatro Stabile in Genova, Charleroi/Danse a.o.) and she collaborated for theatre and music shows (“Tango barbaro” by Copi with Mariangela Melato and Toni Servillo, the Opera “Samson et Dalila” directed by Fura dels Baus a.o.) Since the beginning of the 1980-ies she leads educational and choreographic workshops, both in Italy and abroad, elaborating in the course of time a personal methodological approach, both in the feld of body work and in her improvisation and choreographic composition practices. She teaches at prestigious institutions such as: the University of La Sapienza in Rome, the School of Dramatic Arts of Paolo Grassi in Milan, the University of Torino- C.R.U.D., La Biennale di Venezia, the Beijin Dance Academy, the Roma Tre University, ImPulsTanz a.o. She created many performances for students out of workshops and teaching-projects. In 1998, she planned and directed a Training Course for Interdisciplinary Contemporary Dancers fnanced by the European Community. Since 1998 she collaborated with the National Academy of Dance in Rome as guest professor teaching choreographic composition, methodology of composition and individual projects for the two-year up-graduate specialist curriculum in Choreography – University Courses A.F.A.M., and as guest choreographer realising several big group choreographies. From 2012 to 2015 she was Artistic Director of Progetto Danza at Teatro Carlo Gesualdo in Avellino where she realised the introduction of the frst (and currently the only one in Italy) three year Specialing Undergraduate Course in Composition at Accademia Nazionale di Danza, where she teaches Composition and Improvisation. In 2015 debuted the project Col Corpo Capisco: the frst step Col Corpo Capisco #1 is hosted in the main italian Theater and Festivals; Col Corpo Capisco #2 debuted in June 2016 at Biennale Danza di Venezia. In 2018 within Napoli Teatro Festival debuted Duo Goldberg, creation on Variazioni Goldberg by Bach. In 2018 started 3 years training project Da.Re. – dance research, with her artistic direction , supported by Italian Ministery Mibact